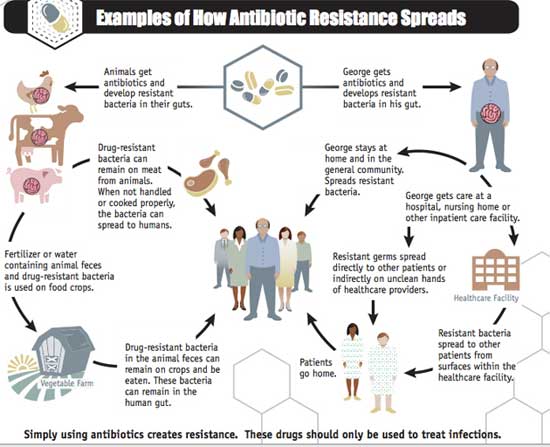 Approximately 80% of all antibiotics used in the United States are given to animals raised on factory farms for human consumption. This means that the majority of the population consuming meat and animal products are also consuming large amounts of antibiotics, most of the time without even knowing it.

Most of the antibiotics used are given to healthy animals to either promote growth or prevent disease, which is caused by the unsanitary living conditions that come with factory farming. This means animals that don’t even need antibiotics are still being fed them — a problem worsened by pharmaceutical reps, who convince farmers that using antibiotics will help them increase sales.

How Does This Happen?

While many argue that the use of antibiotics in meat has nothing to do with antibiotic resistance in humans, there is just too much evidence to the contrary to brush this off.

One study, published by the American Society for Microbiology, shows how an antibiotic-susceptible staph germ passed from humans into pigs, where it then became resistant to the antibiotics tetracycline and methicillin. The antibiotic-resistant staph then learned to jump back into humans.

One author of the study, Paul Keim, says the report shows that “our inappropriate use of antibiotics is now coming back to haunt us.” He believes that the solution is clear, and that is to ban all antibiotics in livestock feed, just like the European Union has already done.

The presence of superbugs in meat and poultry puts humans at risk. As they spread into the environment, they can transmit their antibiotic immunity to other bacteria in our environment, including those that make us ill.

We Are Now Facing the Effects

While this is an immensely important issue and something that we should continue to raise awareness on, initiatives are already underway to stop this problem in its tracks. The public is waking up to the horrors that go on in factory farms via documentaries, investigative journalism, and social media, and as a result, people are already starting to eat less meat, make more ethical decisions about the meat and animal products they do consume, and avoid fast food restaurants.

Because of this consumer awareness, many farms are starting to completely drop the use of antibiotics in their livestock, and popular restaurants and fast foods chains are proudly advertising that their products contain no antibiotics. This is certainly a huge step in the right direction.

Wondering What You Can Do?

Spread the word! And, most importantly, vote with your dollar. Do your research — do not support the companies that are using copious amounts of antibiotics. Consume less meat and animal products, and avoid those coming from factory farms. If everyone just ate considerably less meat, we could eliminate the need for factory farms in the first place, and therefore antibiotic use would be kept to a minimum, only used when an animal actually needs it.